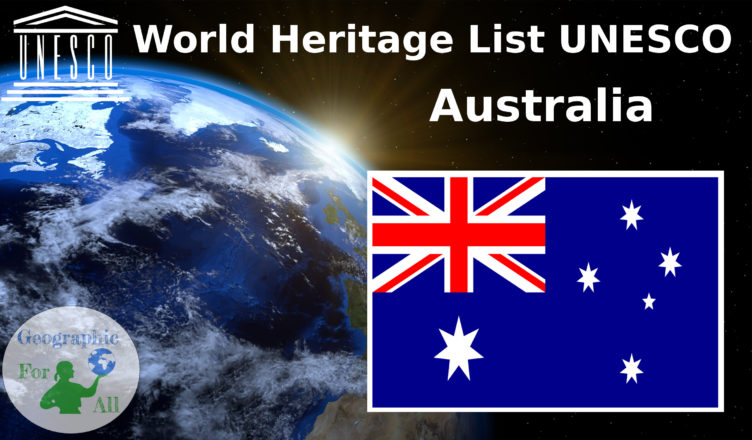 The is a site of remarkable variety and beauty on the north-east coast of Australia. It contains the world’s largest collection of coral reefs, with 400 types of coral, 1,500 species of fish and 4,000 types of mollusc. It also holds great scientific interest as the habitat of species such as the dugong (‘sea cow’) and the large green turtle, which are threatened with extinction.

This unique archaeological and ethnological reserve, located in the Northern Territory, has been inhabited continuously for more than 40,000 years. The cave paintings, rock carvings and archaeological sites record the skills and way of life of the region’s inhabitants, from the hunter-gatherers of prehistoric times to the Aboriginal people still living there. It is a unique example of a complex of ecosystems, including tidal flats, floodplains, lowlands and plateaux, and provides a habitat for a wide range of rare or endemic species of plants and animals.

The fossil remains of a series of lakes and sand formations that date from the Pleistocene can be found in this region, together with archaeological evidence of human occupation dating from 45–60,000 years ago. It is a unique landmark in the study of human evolution on the Australian continent. Several well-preserved fossils of giant marsupials have also been found here.

A remarkable example of isolated oceanic islands, born of volcanic activity more than 2,000 m under the sea, these islands boast a spectacular topography and are home to numerous endemic species, especially birds.

In a region that has been subjected to severe glaciation, these parks and reserves, with their steep gorges, covering an area of over 1 million ha, constitute one of the last expanses of temperate rainforest in the world. Remains found in limestone caves attest to the human occupation of the area for more than 20,000 years.

This site, comprising several protected areas, is situated predominantly along the Great Escarpment on Australia’s east coast. The outstanding geological features displayed around shield volcanic craters and the high number of rare and threatened rainforest species are of international significance for science and conservation.

This area, which stretches along the north-east coast of Australia for some 450 km, is made up largely of tropical rainforests. This biotope offers a particularly extensive and varied array of plants, as well as marsupials and singing birds, along with other rare and endangered animals and plant species.

At the most westerly point of the Australian continent, Shark Bay, with its islands and the land surrounding it, has three exceptional natural features: its vast sea-grass beds, which are the largest (4,800 km2) and richest in the world; its dugong (‘sea cow’) population; and its stromatolites (colonies of algae which form hard, dome-shaped deposits and are among the oldest forms of life on earth). Shark Bay is also home to five species of endangered mammals.

lies just off the east coast of Australia. At 122 km long, it is the largest sand island in the world. Majestic remnants of tall rainforest growing on sand and half the world’s perched freshwater dune lakes are found inland from the beach. The combination of shifting sand-dunes, tropical rainforests and lakes makes it an exceptional site.

Riversleigh and Naracoorte, situated in the north and south respectively of eastern Australia, are among the world’s 10 greatest fossil sites. They are a superb illustration of the key stages of evolution of Australia’s unique fauna.

Heard Island and McDonald Islands are located in the Southern Ocean, approximately 1,700 km from the Antarctic continent and 4,100 km south-west of Perth. As the only volcanically active subantarctic islands they ‘open a window into the earth’, thus providing the opportunity to observe ongoing geomorphic processes and glacial dynamics. The distinctive conservation value of Heard and McDonald – one of the world’s rare pristine island ecosystems – lies in the complete absence of alien plants and animals, as well as human impact.

(34 km long x 5 km wide) is an oceanic island in the Southern Ocean, lying 1,500 km south-east of Tasmania and approximately halfway between Australia and the Antarctic continent. The island is the exposed crest of the undersea Macquarie Ridge, raised to its present position where the Indo-Australian tectonic plate meets the Pacific plate. It is a site of major geoconservation significance, being the only place on earth where rocks from the earth’s mantle (6 km below the ocean floor) are being actively exposed above sea-level. These unique exposures include excellent examples of pillow basalts and other extrusive rocks.

The consists of 1.03 million ha of sandstone plateaux, escarpments and gorges dominated by temperate eucalypt forest. The site, comprised of eight protected areas, is noted for its representation of the evolutionary adaptation and diversification of the eucalypts in post-Gondwana isolation on the Australian continent. Ninety-one eucalypt taxa occur within the which is also outstanding for its exceptional expression of the structural and ecological diversity of the eucalypts associated with its wide range of habitats. The site provides significant representation of Australia’s biodiversity with ten percent of the vascular flora as well as significant numbers of rare or threatened species, including endemic and evolutionary relict species, such as the Wollemi pine, which have persisted in highly-restricted microsites.

The 239,723 ha is located in the State of Western Australia. It contains the deeply dissected Bungle Bungle Range composed of Devonian-age quartz sandstone eroded over a period of 20 million years into a series of beehive-shaped towers or cones, whose steeply sloping surfaces are distinctly marked by regular horizontal bands of dark-grey cyanobacterial crust (single-celled photosynthetic organisms). These outstanding examples of cone karst owe their existence and uniqueness to several interacting geological, biological, erosional and climatic phenomena.