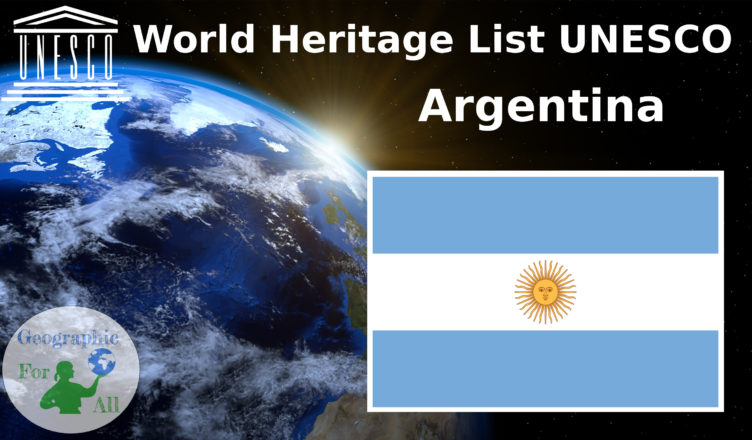 The is an area of exceptional natural beauty, with rugged, towering mountains and numerous glacial lakes, including Lake Argentino, which is 160 km long. At its farthest end, three glaciers meet to dump their effluvia into the milky grey glacial water, launching massive igloo icebergs into the lake with thunderous splashes.

The ruins of São Miguel das Missões in Brazil, and those of San Ignacio Miní, Santa Ana, Nuestra Señora de Loreto and Santa María la Mayor in Argentina, lie at the heart of a tropical forest. They are the impressive remains of five Jesuit missions, built in the land of the Guaranis during the 17th and 18th centuries. Each is characterized by a specific layout and a different state of conservation.

The semicircular waterfall at the heart of this site is some 80 m high and 2,700 m in diameter and is situated on a basaltic line spanning the border between Argentina and Brazil. Made up of many cascades producing vast sprays of water, it is one of the most spectacular waterfalls in the world. The surrounding subtropical rainforest has over 2,000 species of vascular plants and is home to the typical wildlife of the region: tapirs, giant anteaters, howler monkeys, ocelots, jaguars and caymans.

The , contains an exceptional assemblage of cave art, executed between 13,000 and 9,500 years ago. It takes its name (Cave of the Hands) from the stencilled outlines of human hands in the cave, but there are also many depictions of animals, such as guanacos (Lama guanicoe ), still commonly found in the region, as well as hunting scenes. The people responsible for the paintings may have been the ancestors of the historic hunter-gatherer communities of Patagonia found by European settlers in the 19th century.

These two contiguous parks, extending over 275,300 ha in the desert region on the western border of the Sierra Pampeanas of central Argentina, contain the most complete continental fossil record known from the Triassic Period (245-208 million years ago). Six geological formations in the parks contain fossils of a wide range of ancestors of mammals, dinosaurs and plants revealing the evolution of vertebrates and the nature of palaeo-environments in the Triassic Period.

The Jesuit Block in Córdoba, heart of the former Jesuit Province of Paraguay, contains the core buildings of the Jesuit system: the university, the church and residence of the Society of Jesus, and the college. Along with the five estancias, or farming estates, they contain religious and secular buildings, which illustrate the unique religious, social, and economic experiment carried out in the world for a period of over 150 years in the 17th and 18th centuries.

follows the line of a major cultural route, the Camino Inca, along the spectacular valley of the Rio Grande, from its source in the cold high desert plateau of the High Andean lands to its confluence with the Rio Leone some 150 km to the south. The valley shows substantial evidence of its use as a major trade route over the past 10,000 years. It features visible traces of prehistoric hunter-gatherer communities, of the Inca Empire (15th to 16th centuries) and of the fight for independence in the 19th and 20th centuries.

This site is an extensive Inca communication, trade and defence network of roads covering 30,000 km. Constructed by the Incas over several centuries and partly based on pre-Inca infrastructure, this extraordinary network through one of the world’s most extreme geographical terrains linked the snow-capped peaks of the Andes – at an altitude of more than 6,000 m – to the coast, running through hot rainforests, fertile valleys and absolute deserts. It reached its maximum expansion in the 15th century, when it spread across the length and breadth of the Andes. The Qhapac Ñan, Andean Road System includes 273 component sites spread over more than 6,000 km that were selected to highlight the social, political, architectural and engineering achievements of the network, along with its associated infrastructure for trade, accommodation and storage, as well as sites of religious significance.

1321 The Architectural Work of Le Corbusier, an Outstanding Contribution to the Modern Movement – 2016

Chosen from the work of Le Corbusier, the 17 sites comprising this transnational serial property are spread over seven countries and are a testimonial to the invention of a new architectural language that made a break with the past. They were built over a period of a half-century, in the course of what Le Corbusier described as “patient research”. The Complexe du Capitole in Chandigarh (India), the National Museum of Western Art, Tokyo (Japan), the House of Dr Curutchet in La Plata (Argentina) and the Unité d’habitation in Marseille (France) reflect the solutions that the Modern Movement sought to apply during the 20th century to the challenges of inventing new architectural techniques to respond to the needs of society. These masterpieces of creative genius also attest to the internationalization of architectural practice across the planet.

The is located in the Andes of northern Patagonia and its western boundary  coincides with the Chilean border. Successive glaciations have moulded the landscape in the region creating spectacular features such as moraines, glacial cirques and clear-water lakes. The vegetation is dominated by dense temperate forests, which give way to alpine meadows higher up under the rocky Andean peaks. A highly distinctive and emblematic feature is its alerce forest; the globally threatened Alerce tree is the second longest living tree species in the world (>3,600 years). The Alerce forest in the property is in an excellent state of conservation. The property is vital for the protection of some of the last portions of continuous Patagonian Forest in an almost pristine state and is the habitat for a number of endemic and threatened species of flora and fauna.