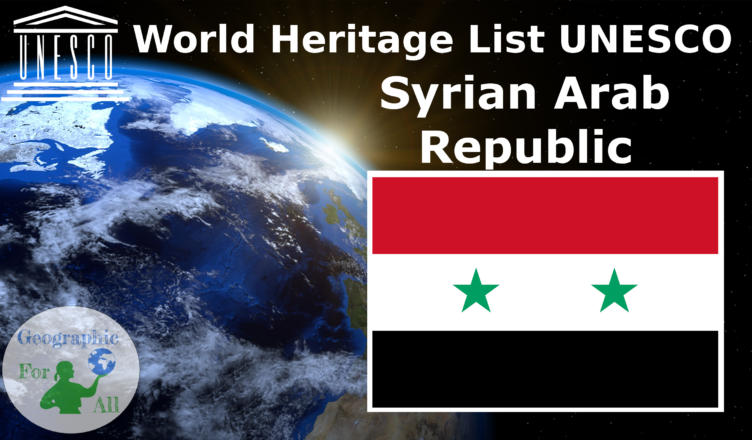 Founded in the 3rd millennium B.C., Damascus is one of the oldest cities in the Middle East. In the Middle Ages, it was the centre of a flourishing craft industry, specializing in swords and lace. The city has some 125 monuments from different periods of its history – one of the most spectacular is the 8th-century Great Mosque of the Umayyads, built on the site of an Assyrian sanctuary.

Bosra, once the capital of the Roman province of Arabia, was an important stopover on the ancient caravan route to Mecca. A magnificent 2nd-century Roman theatre, early Christian ruins and several mosques are found within its great walls.

An oasis in the Syrian desert, north-east of Damascus, Palmyra contains the monumental ruins of a great city that was one of the most important cultural centres of the ancient world. From the 1st to the 2nd century, the art and architecture of Palmyra, standing at the crossroads of several civilizations, married Graeco-Roman techniques with local traditions and Persian influences.

These two castles represent the most significant examples illustrating the exchange of influences and documenting the evolution of fortified architecture in the Near East during the time of the Crusades (11th – 13th centuries). The Crac des Chevaliers was built by the Hospitaller Order of Saint John of Jerusalem from 1142 to 1271. With further construction by the Mamluks in the late 13th century, it ranks among the best-preserved examples of the Crusader castles. The Qal’at Salah El-Din (Fortress of Saladin), even though partly in ruins, represents an outstanding example of this type of fortification, both in terms of the quality of construction and the survival of historical stratigraphy. It retains features from its Byzantine beginnings in the 10th century, the Frankish transformations in the late 12th century and fortifications added by the Ayyubid dynasty (late 12th to mid-13th century).

Some 40 villages grouped in eight parks situated in north-western Syria provide remarkable testimony to rural life in late Antiquity and during the Byzantine period. Abandoned in the 8th to 10th centuries, the villages, which date from the 1st to 7th centuries, feature a remarkably well preserved landscape and the architectural remains of dwellings, pagan temples, churches, cisterns, bathhouses etc. The relict cultural landscape of the villages also constitutes an important illustration of the transition from the ancient pagan world of the Roman Empire to Byzantine Christianity. Vestiges illustrating hydraulic techniques, protective walls and Roman agricultural plot plans furthermore offer testimony to the inhabitants’ mastery of agricultural production.
Nie ma takiej reklamy 🙁