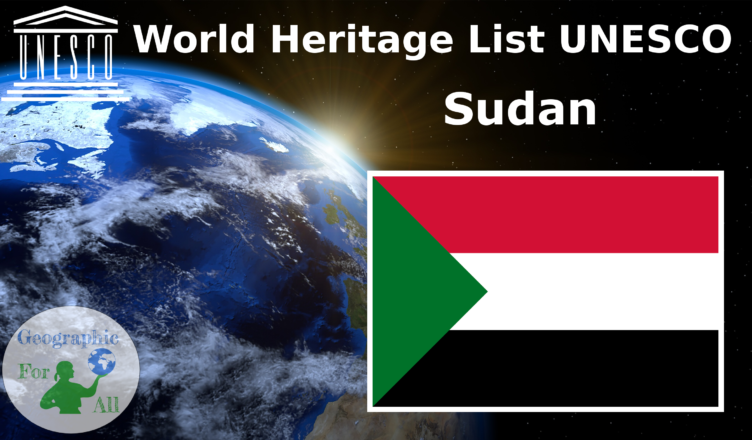 These five archaeological sites, stretching over more than 60km in the Nile valley, are testimony to the Napatan (900 to 270BC) and Meroitic (270BC to 350AD) cultures, of the second kingdom of Kush. Tombs, with and without pyramids, temples, living complexes and palaces, are to be found on the site. Since Antiquity, the hill of Gebel Barkal has been strongly associated with religious traditions and folklore. The largest temples are still considered by the local people as sacred places.

The , a semi-desert landscape between the Nile and Atbara rivers, was the heartland of the Kingdom of Kush, a major power from the 8th century B.C. to the 4th century A.D. The property consists of the royal city of the Kushite kings at Meroe, near the River Nile, the nearby religious site of Naqa and Musawwarat es Sufra. It was the seat of the rulers who occupied Egypt for close to a century and features, among other vestiges, pyramids, temples and domestic buildings as well as major installations connected to water management. Their vast empire extended from the Mediterranean to the heart of Africa, and the property testifies to the exchange between the art, architectures, religions and languages of both regions.

The property consists of two separate areas:
Nie ma takiej reklamy 🙁
Sanganeb is an isolated, coral reef structure in the central Red Sea and the only atoll, 25 km off the shoreline of Sudan. The second component of the property is made up of Dungonab Bay and Mukkawar Island, situated 125 km north of Port Sudan. It includes a highly diverse system of coral reefs, mangroves, seagrass beds, beaches and islets. The site provides a habitat for populations of seabirds, marine mammals, fish, sharks, turtles and manta rays. Dungonab Bay also has a globally significant population of dugongs.