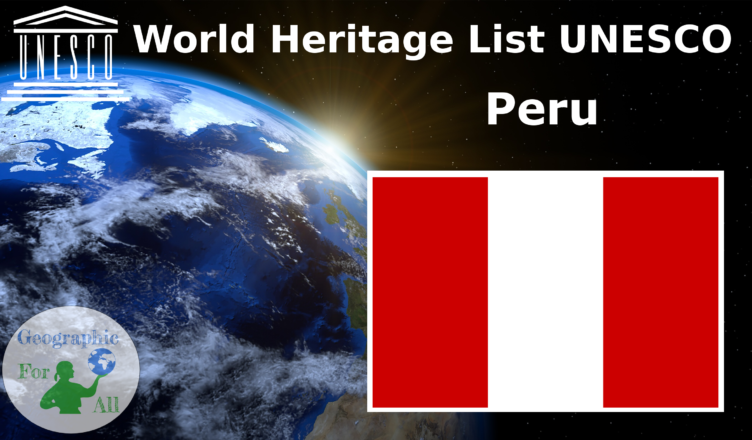 Situated in the Peruvian Andes, Cuzco developed, under the Inca ruler Pachacutec, into a complex urban centre with distinct religious and administrative functions. It was surrounded by clearly delineated areas for agricultural, artisan and industrial production. When the Spaniards conquered it in the 16th century, they preserved the basic structure but built Baroque churches and palaces over the ruins of the Inca city.

Machu Picchu stands 2,430 m above sea-level, in the middle of a tropical mountain forest, in an extraordinarily beautiful setting. It was probably the most amazing urban creation of the Inca Empire at its height; its giant walls, terraces and ramps seem as if they have been cut naturally in the continuous rock escarpments. The natural setting, on the eastern slopes of the Andes, encompasses the upper Amazon basin with its rich diversity of flora and fauna.

The archaeological site of Chavin gave its name to the culture that developed between 1500 and 300 B.C. in this high valley of the Peruvian Andes. This former place of worship is one of the earliest and best-known pre-Columbian sites. Its appearance is striking, with the complex of terraces and squares, surrounded by structures of dressed stone, and the mainly zoomorphic ornamentation.
Nie ma takiej reklamy 🙁

Situated in the Cordillera Blanca, the world’s highest tropical mountain range, Mount Huascarán rises to 6,768 m above sea-level. The deep ravines watered by numerous torrents, the glacial lakes and the variety of the vegetation make it a site of spectacular beauty. It is the home of such species as the spectacled bear and the Andean condor.

The Chimu Kingdom, with Chan Chan as its capital, reached its apogee in the 15th century, not long before falling to the Incas. The planning of this huge city, the largest in pre-Columbian America, reflects a strict political and social strategy, marked by the city’s division into nine ‘citadels’ or ‘palaces’ forming autonomous units.

This huge 1.5 million-ha park has successive tiers of vegetation rising from 150 to 4,200 m above sea-level. The tropical forest in the lower tiers is home to an unrivalled variety of animal and plant species. Some 850 species of birds have been identified and rare species such as the giant otter and the giant armadillo also find refuge there. Jaguars are often sighted in the park.

Although severely damaged by earthquakes, this ‘City of the Kings’ was, until the middle of the 18th century, the capital and most important city of the Spanish dominions in South America. Many of its buildings, such as the Convent of San Francisco (the largest of its type in this part of the world), are the result of collaboration between local craftspeople and others from the Old World.

The park was created in 1983 to protect the fauna and flora of the rainforests that are characteristic of this region of the Andes.
Nie ma takiej reklamy 🙁
There is a high level of endemism among the fauna and flora found in the park. The yellow-tailed woolly monkey, previously thought extinct, is found only in this area. Research undertaken since 1985 has already uncovered 36 previously unknown archaeological sites at altitudes of between 2,500 and 4,000 m, which give a good picture of pre-Inca society.

Located in the arid Peruvian coastal plain, some 400 km south of Lima, the geoglyphs of Nasca and the pampas of Jumana cover about 450 km2 . These lines, which were scratched on the surface of the Error executing “TranslateText” on “https://translate.eu-central-1.amazonaws.com”; AWS HTTP error: Client error: `POST https://translate.eu-central-1.amazonaws.com` resulted in a `429 Too Many Requests` response:
{“__type”:”ThrottlingException”,”message”:”Rate exceeded”}
ThrottlingException (client): Rate exceeded – {“__type”:”ThrottlingException”,”message”:”Rate exceeded”}
groundbetween 500 B.C. and A.D. 500, are among archaeology’s greatest enigmas because of their quantity, nature, size and continuity. The geoglyphs depict living creatures, stylized plants and imaginary beings, as well as geometric figures several kilometres long. They are believed to have had ritual astronomical functions.

The historic centre of Arequipa, built in volcanic sillar rock, represents an integration of European and native building techniques and characteristics, expressed in the admirable work of colonial masters and Criollo and Indian masons. This combination of influences is illustrated by the city’s robust walls, archways and vaults, courtyards and open spaces, and the intricate Baroque decoration of its facades.
Nie ma takiej reklamy 🙁

The 5000-year-old 626-hectare archaeological site of The is situated on a dry desert terrace overlooking the green valley of the Supe river. It dates back to the Late Archaic Period of the Central Andes and is the oldest centre of civilization in the Americas. Exceptionally well-preserved, the site is impressive in terms of its design and the complexity of its architectural, especially its monumental stone and earthen platform mounts and sunken circular courts. One of 18 urban settlements situated in the same area, Caral features complex and monumental architecture, including six large pyramidal structures. A quipu (the knot system used in Andean civilizations to record information) found on the site testifies to the development and complexity of Caral society. The city’s plan and some of its components, including pyramidal structures and residence of the elite, show clear evidence of ceremonial functions, signifying a powerful religious ideology.

This site is an extensive Inca communication, trade and defence network of roads covering 30,000km. Constructed by the Incas over several centuries and partly based on pre-Inca infrastructure, this extraordinary network through one of the world’s most extreme geographical terrains linked the snow-capped peaks of the Andes – at an altitude of more than 6,000m – to the coast, running through hot rainforests, fertile valleys and absolute deserts. It reached its maximum expansion in the 15th century, when it spread across the length and breadth of the Andes. The Qhapac Ñan, Andean Road System includes 273 component sites spread over more than 6,000km that were selected to highlight the social, political, architectural and engineering achievements of the network, along with its associated infrastructure for trade, accommodation and storage, as well as sites of religious significance.
Nie ma takiej reklamy 🙁