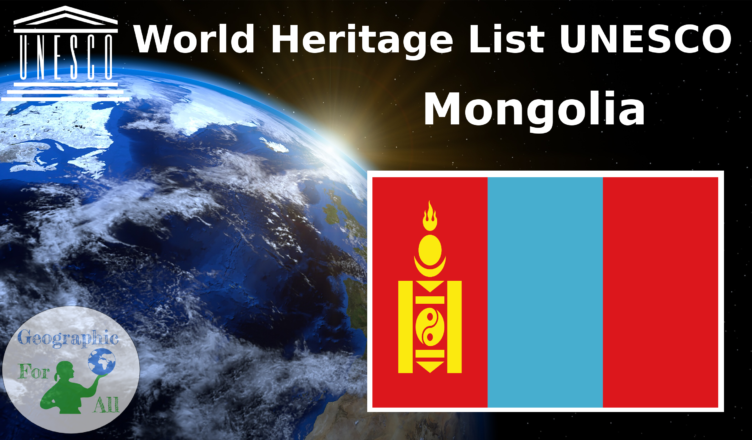 The (1,068,853 ha), is the northernmost of the enclosed basins of Central Asia. It takes its name from Uvs Nuur Lake, a large, shallow and very saline lake, important for migrating birds, waterfowl and seabirds. The site is made up of twelve protected areas representing the major biomes of eastern Eurasia. The steppe ecosystem supports a rich diversity of birds and the desert is home to a number of rare gerbil, jerboas and the marbled polecat. The mountains are an important refuge for the globally endangered snow leopard, mountain sheep (argali) and the Asiatic ibex.

The 121,967-ha encompasses an extensive area of pastureland on both banks of the Orkhon River and includes numerous archaeological remains dating back to the 6th century. The site also includes Kharkhorum, the 13th- and 14th-century capital of Chingis (Genghis) Khan’s vast Empire. Collectively the remains in the site reflect the symbiotic links between nomadic, pastoral societies and their administrative and religious centres, and the importance of the Orkhon valley in the history of central Asia. The grassland is still grazed by Mongolian nomadic pastoralists.

1382 Petroglyphic Complexes of the Mongolian Altai – 2011

The numerous rock carvings and funerary monuments found in these three sites illustrate the development of culture in Mongolia over a period of 12,000 years.
Nie ma takiej reklamy 🙁
The earliest images reflect a time (11,000 – 6,000 BC) when the area was partly forested and the valley provided a habitat for hunters of large game. Later images show the transition to herding as the dominant way of life. The most recent images show the transition to a horse-dependent nomadic lifestyle during the early 1st millennium BC, the Scythian period and the later Turkic period (7th and 8th centuries AD). The carvings contribute valuably to our understanding of pre-historic communities in northern Asia.

The site is situated in the north-east of the country in the central part of the Khentii mountain chain where the vast Central Asian steppe meets the coniferous forests of the Siberian taiga. Burkhan Khaldun is associated with the worship of sacred mountains, rivers and ovoo-s (shamanic rock cairns), in which ceremonies have been shaped by a fusion of ancient shamanic and Buddhist practices. The site is also believed to be the place of Genghis Khan’s birth and burial. It testifies to his efforts to establish mountain worship as an important part of the unification of the Mongol people.

Shared between Mongolia and the Russian Federation, this site is an outstanding example of the Daurian Steppe eco-region, which extends from eastern Mongolia into Russian Siberia and northeastern China. Cyclical climate changes, with distinct dry and wet periods lead to a wide diversity of species and ecosystems of global significance. The different types of steppe ecosystems represented, such as grassland and forest, as well as lakes and wetlands serve as habitats for rare species of fauna, such as the White-naped crane, Great Bustard, Relict Gull and Swan goose, as well as millions of vulnerable, endangered or threatened migratory birds.
Nie ma takiej reklamy 🙁
It is also a critical site on the transboundary migration path for the Mongolian gazelle.