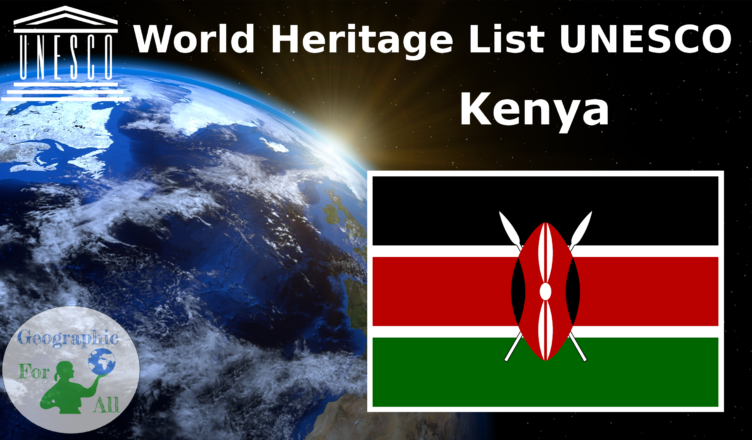 The most saline of Africa’s large lakes, Turkana is an outstanding laboratory for the study of plant and animal communities. The three National Parks serve as a stopover for migrant waterfowl and are major breeding grounds for the Nile crocodile, hippopotamus and a variety of venomous snakes. The Koobi Fora deposits, rich in mammalian, molluscan and other fossil remains, have contributed more to the understanding of paleo-environments than any other site on the continent.

At 5,199 m, Mount Kenya is the second highest peak in Africa. It is an ancient extinct volcano, which during its period of activity (3.1-2.6 million years ago) is thought to have risen to 6,500 m. There are 12 remnant glaciers on the mountain, all receding rapidly, and four secondary peaks that sit at the head of the U-shaped glacial valleys. With its rugged glacier-clad summits and forested middle slopes, Mount Kenya is one of the most impressive landscapes in East Africa. The evolution and ecology of its afro-alpine flora provide an outstanding example of ecological and biological processes. Through the Lewa Wildlife Conservancy and Ngare Ndare Forest Reserve, the property also incorporates lower lying scenic foothills and arid habitats of high biodiversity, situated in the ecological transition zone between the mountain ecosystem and the semi-arid savanna grasslands.
Nie ma takiej reklamy 🙁
The area also lies within the traditional migrating route of the African elephant population.

is the oldest and best-preserved Swahili settlement in East Africa, retaining its traditional functions. Built in coral stone and mangrove timber, the town is characterized by the simplicity of structural forms enriched by such features as inner courtyards, verandas, and elaborately carved wooden doors. Lamu has hosted major Muslim religious festivals since the 19th century, and has become a significant centre for the study of Islamic and Swahili cultures.

The Mijikenda Kaya Forests consist of 10 separate forest sites spread over some 200 km along the coast containing the remains of numerous fortified villages, known as kayas, of the Mijikenda people. The kayas, created as of the 16th century but abandoned by the 1940s, are now regarded as the abodes of ancestors and are revered as sacred sites and, as such, are maintained as by councils of elders. The site is inscribed as bearing unique testimony to a cultural tradition and for its direct link to a living tradition.

The Fort, built by the Portuguese in 1593-1596 to the designs of Giovanni Battista Cairati to protect the port of Mombasa, is one of the most outstanding and well preserved examples of 16th Portuguese military fortification and a landmark in the history of this type of construction. The Fort’s layout and form reflected the Renaissance ideal that perfect proportions and geometric harmony are to be found in the human body. The property covers an area of 2.36 hectares and includes the fort’s moat and immediate surroundings.

The , a natural property of outstanding beauty, comprises three inter-linked relatively shallow lakes (Lake Bogoria, Lake Nakuru and Lake Elementaita) in the Rift Valley Province of Kenya and covers a total area of 32,034 hectares.
Nie ma takiej reklamy 🙁
The property is home to 13 globally threatened bird species and some of the highest bird diversities in the world. It is the single most important foraging site for the lesser flamingo anywhere, and a major nesting and breeding ground for great white pelicans. The property features sizeable mammal populations, including black rhino, Rothschild’s giraffe, greater kudu, lion, Error executing “TranslateText” on “https://translate.eu-central-1.amazonaws.com”; AWS HTTP error: Client error: `POST https://translate.eu-central-1.amazonaws.com` resulted in a `429 Too Many Requests` response:
{“__type”:”ThrottlingException”,”message”:”Rate exceeded”}
ThrottlingException (client): Rate exceeded – {“__type”:”ThrottlingException”,”message”:”Rate exceeded”}
cheetahand wild dogs and is valuable for the study of ecological processes of major importance.

Situated north-west of the town of Migori, in the Lake Victoria region, this dry-stone walled settlement was probably built in the 16th century CE. The Ohinga (i.e. settlement) seems to have served as a fort for communities and livestock, but also defined social entities and relationships linked to lineage. Thimlich Ohinga is the largest and best preserved of these traditional enclosures. It is an exceptional example of the tradition of massive dry-stone walled enclosures, typical of the first pastoral communities in the Lake Victoria Basin, which persisted from the 16th to the mid-20th century.